With its area of 10,33 hectares, the Devil's Lake is the second largest in the Šumava. It lies in the altitude of 1030 m and its maximum depth is 37 m. The lake is fed by groundwater as well as affluent streams on the ground. The lake wall is not as impressive as the one of the Black Lake. In the past, there was an observational footpath in the lake wall built in 1880-1882 from the order of the Prince of Hohenzollern at a price of 3 500 guldens. The construction was initiated and managed by the head forester Julius Komárek - a patriot promoting extensive access to local forests. Komárek was a father of the Professor Julius Miloš Komárek born in 1892 in Železná Ruda - a significant scientist in the fields of zoology, entomology, forest protection and game management, who founded and managed the Forestry and Game Management Research Institute and was a Dean of the Faculty of Science of Charles University. He was one of the initiators of establishment of national parks in the Tatras and the Šumava.

The location has been protected since 1933 already (by the decree of the Ministry of Education and Public Education No. 143547/33). The principles of conservation were nevertheless originally not contradictory to the "soft" tourism and hiking. The footbridges on the paths, formerly also used by the border patrols, were absurdly removed by conservationists in 1990.

All today's attempts for recovery of the footpath by the municipality of Železná Ruda meet with opposition and encounter negative expert opinions in respect with the alleged negative environmental impact (habitat of Cantabrian Capercaillie).

On their journey from Železná Ruda to the Devil's Lake, the tourist pass a memorial of Adolf Kašpar, paying tribute to this famous painter, besides else also the first illustrator of Babička (The Grandmother) by Božena Němcová. 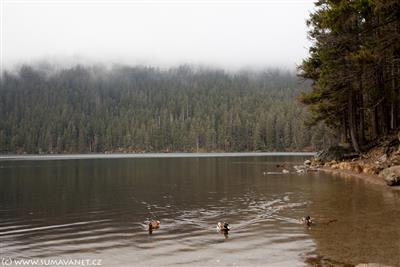