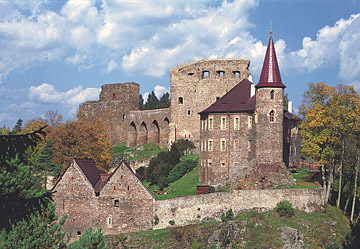 The castle was built at the beginning of 14th century and is situated over the village of Velhartice. The founder of the fortress may have been Bušek of Velhartice, who built the castle palace and a  big wall. The huge prismatic tower, which was an advanced designed, was built next and this was connected to the old palace by a unique stone bridge. Menhart of Hradec, since 1436 the most important ruler of Karlštejn, intended to reinforce the castle and keep the treasure of the crown jewels in it. The jewels had been taken there in the times of Menhart’s conflicts with George of Poděbrady. The House of Švihov of Rýzmberk and Zdeněk Lev of Rožmitál owned the castle after the House of Hradec. Later the imperial General Baltazar de Marradas won the castle and sold it to the well-known adventurer, Martin Hoeff Huert. He completely rebuilt the castle that had been damaged in the war. Later owners did not make many changes to the castle. The last owner was the House of Windischgrätz until 1945.
When coming to visit this late-Gothic style castle, now a national historic landmark, you can visit the castle or the palace and watch an audio-visual program.